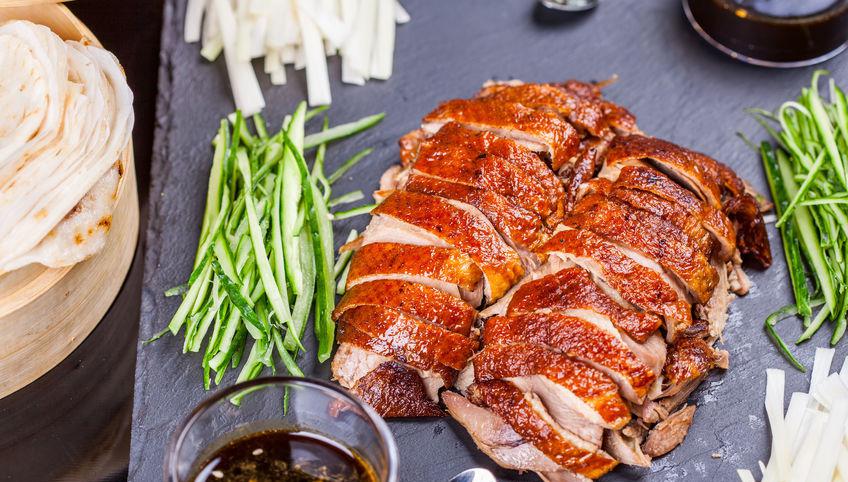 There’s a good reason that the Peking duck is one of China’s most popular dishes. After all, it isn’t every culinary experience that can trace its roots back more than 700 years to royal lineage. Peking duck, which alternatively goes by the names Chinese roast duck or Beijing duck, became popular as a main dish during the Yuan Dynasty of 1271 to 1378 when Mongol empires ruled China.

By the 15th century, this dish became a staple on the dinner menu for the imperial courts. Cooks from all over China traveled for days to reach Beijing so they could prepare Peking duck for the Emperor. It wasn’t long before the tastiest dishes made their way into local restaurants. In fact, a restaurant called Bianyifang served the dish as early as 1522.

The Process of Preparing Peking Duck

Part of the popularity of Peking duck in Chinese culture and around the world is the fact that its taste has changed little through the years. Despite all of the cooking technology available today, most chefs prefer the traditional preparation methods for Peking Duck.

A chef hangs the duck with its head still attached using a long pole with ties at the end to keep the duck in place. He or she then pumps air into the duck to separate the fat from the skin. The remaining steps are as follows:

The dish is ready to prepare for serving once it is apparent that the inside is tender and succulent while the outside is crispy. The skin should have a reddish appearance that it can only achieve using traditional Chinese cooking methods. Before serving Peking duck to guests, the chef will bring it to their table and cut it into approximately 100 thin slices.

Why Most Chefs Still Prefer the Traditional Method of Preparation

While some restaurants have opted for electric ovens to roast Peking duck, this can dramatically detract from the crisp, juicy taste that made it famous. Chefs often roast several ducks at a time, which makes it difficult to monitor the cooking process.

Using a traditional fireclay oven, a chef can use a long stick to adjust the cooking duck if something isn’t going right with the cooking process.

The traditional cooking method enables chefs to pay meticulous attention to detail. More than seven centuries after the dish first appeared in China, people remain willing to pay extra money to ensure that they eat a meal of Peking duck prepared the old-time way.

January 18, 2019
« Previous post
6 Tasty Dishes to Prepare While on a Ketogenic Diet
Next post »
How Do You Earn a Michelin Star?